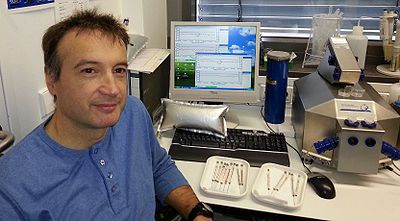 Several investigations demonstrated that a hibernation-like metabolic state characterized by reduced energy expenditure and hypothermia can be induced in mice that have inhaled 80-100 ppm of H2S [1,2,3]. These observations suggest the exciting prospect of pharmacologically controlling energy expenditure in severe trauma and disease states by protecting against transitory hypoxia. However, equivocal data available from studies on large animals still raise serious doubts on the genuine effects of H2S on cell metabolism and mitochondrial function. In fact, data from sheep or swine failed to show any metabolic effect [4,5], and the effects observed injecting the intravenous sulfide donor Na2S in pigs are still controversial [6,7]. Obviously, body temperature is a major confounder in most animal studies on sulfide, as it can be easily modified, deliberately or accidentally, in murine experiments, but is hard to control in larger species. Therefore, it is still not clear which impact non-toxic doses of sulfide may have in-vivo on metabolic or mitochondrial functions beyond eventual temperature related effects.

In the last few years we performed experiments on the effects of sulfide in anesthetized and mechanically ventilated mice using a setting closely resembling an intensive care unit [8]. A closed loop control of body temperature allowed to efficiently separate genuine effects of sulfide and body temperature. Our data obtained ex-vivo by measuring mitochondrial respiration in small liver biopsies by means of high-resolution respirometry performed with the O2k-Oxygraph (Oroboros Instruments, Innsbruck, AT) suggest that low (non-toxic) sulfide concentrations per se do not suppress mitochondrial respiratory activity (Figure 1, A and B). Nevertheless, sulfide normalised the amount of LEAK-respiration, which was increased in septic animals under normothermia, an effect which was not related to any change in body temperature (Figure 1, C and D).

In conclusion, the main premise for studying mitochondrial effects of sulfide in animal models should be an efficient control of body temperature in order to clearly separate the effects of both factors. Technically, this can be done most easily in small animals like mice. Of course, the question remains to which extent data obtained in mice may be translated to larger mammalian species. Further preliminary data obtained on tissue biopsies from mice and pigs, however, indicate that sulfide is processed in a very similar way at the cellular level in different mammalian species, thus suggesting that the effects of sulfide at the mitochondrial level may be comparable between the species.

FIGURE 1: Mitochondrial respiration in mice ex-vivo after 5 h of mechanical ventilation. Treatments were control (closed bars) vs. sepsis (CLP-induced, light bars), intravenous Na2S (diagrams B and D) vs. placebo (diagrams A and C), and 38 °C (red bars) vs. 27 °C (blue bars). All data are means and SD. LEAL, OXPHOS, and ET-pathway respiration were almost equal regardless of the sulfide treatment (A vs. B), but LEAK ratios (L/E) as well as the P/E ratio were significantly increased at 38 °C in the septic animals (light red bars in diagram C) but normalised under sulfide treatment (diagram D). Mitochondrial respiration was measured at 37 °C in all groups regardless of the temperature of 38 °C or 27 °C of the animals under anesthesia and mechanical ventilation.