Abstract: Limitation of lifespan in replicative senescence is related to oxidative stress, which is probably both the cause and consequence of impaired mitochondrial respiratory function. The respiration of senescent human diploid fibroblasts was analysed by high-resolution respirometry. To rule out cell-cycle effects, proliferating and growth-arrested young fibroblasts were used as controls. Noncoupled respiration, as normalized to citrate synthase activity, remained unchanged, reflecting a constant mitochondrial Electron transfer pathway (ET-pathway) capacity. Oligomycin-inhibited LEAK respiration, however, was significantly increased in mitochondria of senescent cells, indicating a lower coupling of electron transfer to phosphorylation of ADP to ATP. In contrast, growth-arrested young fibroblasts exhibited a higher coupling control compared with proliferating controls. In living cells, partial uncoupling (dyscoupling) may lead to either decreased oxidative ATP production or a compensatory increase in ROUTINE respiration. To distinguish between these alternatives, we subtracted oligomycin-inhibited respiration from ROUTINE respiration, which allowed us to determine the part of respiratory activity coupled with ATP production. Despite substantial differences in the respiratory acceptor control ratio, ranging from 4 to 11 in the different experimental groups, a fixed proportion of ET-capacity was maintained for coupled oxidative phosphorylation in all the experimental groups. This finding indicates that the senescent cells fully compensate for increased proton leakage by enhanced electron-transfer activity in the ROUTINE state. These results provide a new insight into age-associated defects in mitochondrial function and compensatory mechanisms in living cells. 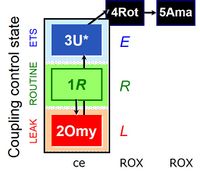 An update on nomenclature 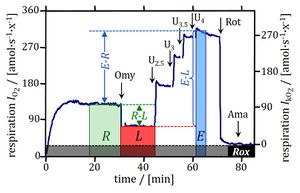 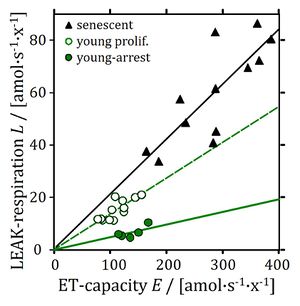 High-resolution respirometry with the ceCCP