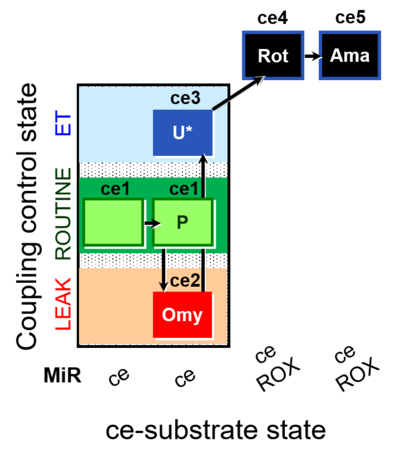 SUIT-003 O2 ce D012 is a coupling control protocol for living cells. Different coupling control states are assessed (ROUTINE - L(Omy) - E) at ce-substrate state. The use of pyruvate is recommended to support the cell respiration if the incubation media is not cell culture media. The use of oligomycin provides important information about the ETS and TCA activity but the optimal concentration has to be carefully determined experimentally to avoid the known side effects over the ET-capacity. Rotenone and Antimycin A provide the ROX state and its sequential addition allows the extension of the protocol with the cell viability test module (See CCV SUIT-003 O2 ce-pce D020). 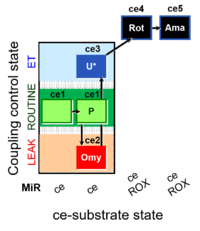 + With the extended module, S-ET capacity can be assessed after the performance of the coupling control protocol, as well as outer mt-membrane integrity with the addition of cytochrome c.
+ Flexibility of experiment duration: from 1 hour (cell coupling control protocol) to 2 and a half hours (cell coupling control, cell viability test module and CIV module).
- The addition of oligomycin has to be carefully tested to avoid inhibitory effects in the evaluation of the ET-capacity.
- Careful washing is required after the experiment to avoid carry-over of inhibitors and uncoupler.