Substrate-uncoupler-inhibitor-titration (SUIT) protocols used in high-resolution respirometry have been developed [1] to evaluate the control of separate and combined mitochondrial pathways for OXPHOS analysis in an economical approach while at the same time minimizing experimental variability and sample requirement. Nevertheless, there are some inherent limitations to this approach: a) CI-linked respiratory activity cannot be totally isolated from that of CII, unless CII is selectively inhibited. That is, many substrates or combinations of substrates aimed at fuelling CI via feeding into the tricarboxylic acid (TCA) cycle will, besides stimulating NADH production, also produce succinate (S) feeding CII. The extent of the contribution of CII to the overall respiratory activity will depend on the substrate combination chosen, their concentrations, and the cell or tissue-type investigated, reflecting tissue-specific enzyme expression patterns and substrate preferences. b) The activity of CII is prone to be altered by intermediates obtained in the course of evaluation of CI activity. Succinate dehydrogenase (SDH) is known to be sensitive to inhibition by oxaloacetate [2], which may not be added directly but may be produced upon addition of other substrates [3]. Observation on multiple types of mitochondria revealed that malate (M), a substrate used to fuel CI-linked respiration, inhibits both coupled and uncoupled CII-linked respiration [4].

In the present study, we evaluated the effect of three concentrations of M on OXPHOS and ET-pathway respiration of rat brain mitochondria with 10 mM succinate + 0.5 µM rotenone (CII protocol) as well as on the respiratory rates obtained in a comprehensive SUIT protocol using sequential titrations of PMG, ADP, S, FCCP, Rot and Ama (Fig.1). To determine the optimum concentration of M as well as optimal combination of substrates for evaluating CI-linked respiration, we used 0.5, 2 and 5 mM M in combination with P, G, PG and PGS. Towards the end of each run we added 5 mM malonate (Mna), an inhibitor of CII, so as to reveal the actual contribution of CI-linked respiration to total OXPHOS respiration (Fig.2).

'Figure 1. A: The effect of malate on the respiration with 10 mM succinate + 0.5 µM rotenone (CII protocol) in OXPHOS and ET-pathway state in rat brain mitochondria.

B: Respiratory rates determined with the comprehensive protocol with 3 concentrations of malate (M), 0.5, 2 and 5 mM, in mitochondrial respiration medium MiR05 , at 37°C. In the protocol, 5 mM pyruvate (P), 10 mM glutamate (G), M, 2 mM ADP, 10 mM succinate (S) and FCCP 0.5-1 µM were titrated to determine ET capacity with CI&II substrates. Subsequently, 0.5 µM rotenone was added for evaluation of CII-linked ET-pathway, followed by antimycin A for evaluation of residual oxygen consumption (ROX). For comparison, the value of CII-linked ET-pathway determined in the CII protocol is shown in the graph. All data are corrected for ROX shown in the graph and are means ± SEM of experiments conducted with 3-4 preparations. 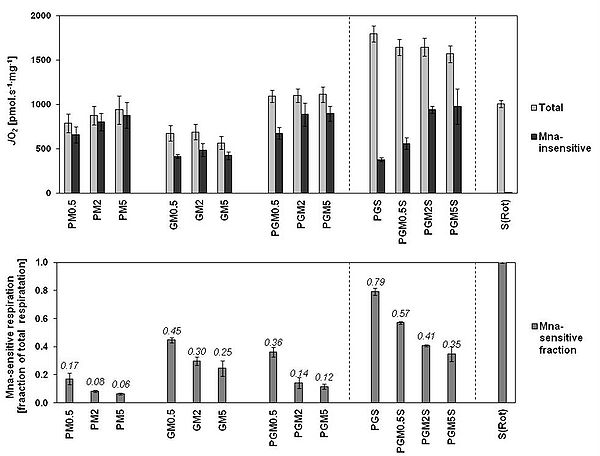 Supported by Erasmus and Action Austria-Slovakia