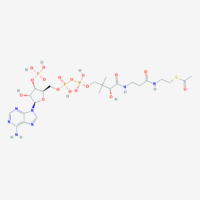 Acetyl-CoA, C23H38N7O17P3S, is a central piece in metabolism involved in several biological processes, but its main role is to deliver the acetyl group into the TCA cycle for its oxidation. It can be synthesized in different pathways: (i) in glycolysis from pyruvate, by pyruvate dehydrogenase, which also forms NADH; (ii) from fatty acids β-oxidation, which releases one acetyl-CoA each round; (iii) in the catabolism of some amino acids such as leucine, lysine, phenylalanine, tyrosine and tryptophan.