Amplex® UltraRed (AmR) is used as an extrinsic fluorophore for measurement of hydrogen peroxide production (ROS) by cells or mitochondrial preparations. The reaction of H2O2 and AmR is catalyzed by horseradish peroxidase to produce the red fluorescent compound resorufin (excitation wavelength 563 nm, emission 587 nm; the fluorescenet product according to the supplier is called UltroxRed in the case of Amplex® UltraRed which has a very similar structure to resorufin). The change of emitted fluorescence intensity is directly proportional to the concentration of H2O2 added, whereby the H2O2 is consumed.

In high-resolution respirometry HRR the Amplex® Red method[1] is used with the O2k-FluoRespirometer (O2k-Series D-G: O2k-Fluo LED2-Module) selecting the Fluorescence-Sensor Green and Smart Fluo-Sensor for O2k-Series H. Use black stoppers with black cover-slips to exclude disturbances by external light sources. The fluorescence sensors are inserted though the windows of the O2k-Chambers[2]. The O2k has also been coupled to a fluorescence spectrophotometer with a light guide inserted through the black PEEK stopper.[3]

The use of AmR in HRR to simultaneously determine respiration and H2O2 flux has been intensively tested in the Oroboros lab (see references).

Prepare a 10 mM storage solution of Amplex® UltraRed reagent (AmR), which will also serve as stock solution, by adding 340 μL of fresh, high‑quality DMSO (Sigma D8418) to one commercial vial of Amplex® UltraRed reagent (1 mg). Vortex well to dissolve. Protect AmR from light and moisture. The storage solution should then be divided into 10 µl aliquots and stored in the dark, protected from moisture at –20°C for future use. When stored properly, the 10 mM storage solution is stable for 6 months. We have observed that after long-term storage AmR may exert a profound inhibitory effect on cell respiration.

Note: The preparation of the 10 mM storage solution follows the procedure suggested by the manufacturer. The manufacturer states only an approximate molecular weight for the Amplex® UltraRed formulation and does not publish details how the Amplex® UltraRed formulation deviates from the substance 10-acetyl-3,7-dihydroxyphenoxazine (CAS# 119171-73-2), known as Amplex® Red.

Superoxide dismutase (SOD) is included to generate H2O2 from superoxide.

(Sigma-Aldrich S 8409-15KU): Depending on the batch the SOD preparation may contain a specific activity of 2,000–6,000 units/mg protein. We recommend to use the enzyme at 5 U/mL, the final volume to be added to the respiratory chamber has thus to be adjusted accordingly.
Experiments can be performed in the absence of SOD.

Calibration standards of H2O2: Commercial solution (Sigma-Aldrich 323381 - 25 mL hydrogen peroxide solution 3 wt.%; stabilized with acetanilide, c. 200 ppm) = 880 mM H2O2.
The H2O2 calibration solution has to be prepared fresh every day, kept away from light exposure, and freezing should be avoided.

The sensitivity to H2O2 of the Amplex® UltraRed assay changes during the experiment, thus requires multiple calibrations. These sensitivity changes may be the function of (1) experimental time and accumulating UltroxRed (similar to resorufin), (2) changes of the optical properties due to titrations, (3) the radical scavenging capacity of the sample. Therefore, H2O2 calibrations are performed before and after sample addition, and after selected titration steps. - »Komlodi 2018 Methods Mol Biol« 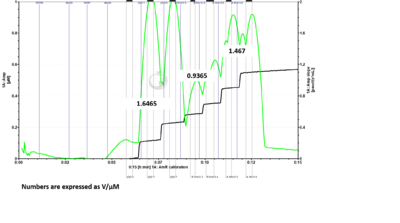 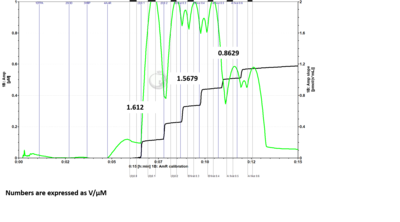 Answer: It is recommended to fill the syringe with H2O2 each time with 5 µL for each O2k-Chamber instead of filling up the syringe with 10 µL and titrate one chamber after the other. Based on tests of Jennifer Norman (US_CA Davis_Roshanravan B) it seems that either the syringe for H2O2 titration is not precise filling it up with the maximal volume or H2O2 might be degraded by light already in the syringe.

Experimental media for the AmR assay

Media with high antioxidant activity compete with HRP and partially consume H2O2 before it can react with AmR to form the active fluorophore UltroxRed (similar to resorufin). This was shown by comparing the resorufin-sensitivity and H2O2-sensitivity [6],[7].

The H2O2-sensitivity is much higher in a simple phosphate buffer compared to media with strong antioxidant capacity. In contrast, this is not the case for the resorufin-sensitivity.

In the absence of sample, there is a spontaneous increase of the ultroxred fluorescence signal over time, the extent of which depends on components of the respiration medium (Krumschnabel et al 2015). The sensitivity – the change in fluorescence per unit of H2O2 produced in or added to the chamber – depends on the medium and tends to decline over time. Both the background change in fluorescence and the change in assay sensitivity over time need to be corrected for in data analysis, for which DatLab-Analysis templates are available.

A study by Miwa et al 2016 (Free Radical Bio Med 90:173) suggests that this phenomenon is related to a mitochondrially expressed carboxylesterase which converts Amplex® Red to resorufin at a high rate. The issue can be relatively easily solved by adding a protease inhibitor to various mitochondrial preparations as described here.

Injection of chemicals (e.g. substrates, uncouplers, inhibitors, H2O2) can cause artefacts as observed in the figure:

The marks should always be set on the stable signal avoiding the artefacts area.

Votyakova TV, Reynolds IJ (2014 Arch Biochem Biophys 431:138-44) showed that NADH and reduced glutathione are able to react with AmR in the presence of O2 and HRP and create a background in the absence of mitochondria. If the mitochondria remain intact, this above-mentioned reaction is negligible. If you add SOD (superoxide dismutase), you can avoid this side-effect of the AmR assay.

The following substances/ classes of substances are strictly incompatible with the Amplex® Red method for theoretical reasons:

The effect of other substances should be checked by experiments without biological sample, including comparing the sensitivity (result of calibration) before and after injecting the substances.

In preliminary experiments Oroboros Instruments evaluated small amounts (as typically used in SUIT protocols) of the following substances as compatible with the method:

The Amplex® method is based on the H2O2 dependent oxidation of AmR to UltroxRed by HRP. Under unfavorable conditions AmR may be oxidized even in the absence of H2O2. At a small rate such an oxidation occurs in the presence of HRP even without any sample present. The magnitude of this background signal ("drift") depends, among other things, on the light intensity used and can therefore be minimized by using the suggested or lower light intensity. Components of the sample may however induce a far higher, non H2O2 related rate of AmR oxidation. Therefore, especially when applying the method on new types of samples the method should be checked for artifacts. A few approaches are listed here:

Sequential addition of HRP and AmR: This method is particular easy to implement if AmR and HRP have to be added to the chamber already containing the sample anyway: First, inject Amplex® Red and wait a few minutes for flux stabilization. The Amp slope has to stay near zero. Then add HRP. The Amp slope should increase and correspond to the H2O2 production. If a significant Amp slope is detected before the addition of HRP this increase in fluorescence is not caused by H2O2 production. The experiment can be continued as usual after this test. If the sample is injected routinely into the chamber already containing AmR and HRP the method can not be applied. In this case, it is suggested to change this sequence at least for one experiment.

Addition of catalse: After a H2O2 flux (production) is established, a high dose (e.g. 10 µL of a 280,000 U/mL stock solution) of catalase is injected. Catalase competes with HRP for the available H2O2. Then the apparent H2O2 flux (the Amp slope) should be reduced to near zero as a control for distinguishing an unspecific chemical background slope from H2O2 dependent Amplex® UltraRed oxidation.

Note: The experiment cannot be continued afterwards for measurement of hydrogen peroxide production, whereas respiration can be recorded onwards.

How to set a mark to calibrate the fluorescence signal using Amplex® UltraRed assay?

To calibrate the fluorescence signal into µM, set the marks to the black line.

How to set a mark to analyse H2O2 flux?

How to analyse the data in the Excel template?